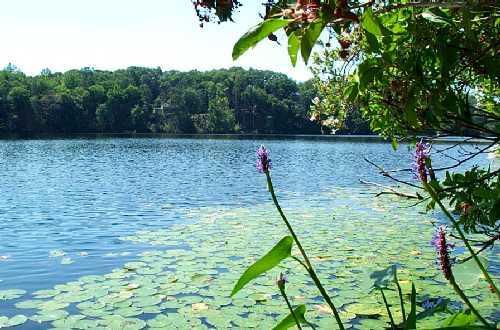 Nehantic was the first state forest in New London County, and has all been purchased since 1925. Considerable difficulty was experienced in selecting the site. Although there is a great deal of wooded land in the county, it is so cut up by open farm lands that large areas of forest in one block are difficult to find. The land is mostly covered with a second growth of hardwoods. There are a number of good trout streams in the forest.

The forest takes its name from the Nehantic Indians, whose ranging grounds once extended from Wecapaug Brook, in what is now Rhode Island, to the Connecticut River. Shortly before the settlers arrived the Pequots had invaded Nehantic territory and annexed about half of the land claimed by the tribe.

Nehantic State Forest is a publicly owned forest and recreation area occupying two parcels, one in the town of Lyme and one in the towns of East Lyme and Salem.  The forest, which totals 5,062 acres is the site of regular prescribed burns and timber-harvesting operations.  It is managed by the Connecticut Department of Energy and Environmental Protection.

The forest offers opportunities for hiking, hunting, picnicking, swimming, and boating.  The Lyme portion of the forest provides access to 69-acre Uncas Pond and 30-acre Norwich Pond.  Boat launches are located on each pond. The ponds and their connecting stream, Falls Brook, sit at the western edge of Becket Hill State Park Reserve. No roads or trails pass from the state forest into the undeveloped and otherwise inaccessible 260-acre state park reserve though dirt park roads and the Blue-Blazed Nayantaquit Trail hiking trail system make much of the Lyme section (Western Block) of Nehantic State Forest easily accessible to the public.